I am all for a commonly agreed definition of ACM as long as it does not limit the necessary benefits for business. I propose that ACM has been pretty well-defined already, but because so many vendors – either BPM or otherwise – have differing functionalities, no written consensus has been reached. Quite understandable when the goal is to define a market fragment or product category that everyone wants to lead or that BPMS do ACM anyway. My intention was always different. I want to expand on today’s very limiting implementations of BPM and bring it out of the doldrums of existing BPMS relying on flowcharting. Yes, there is most probably a market for a basic ACM functionality, but that will move to the Cloud with the likes of Trello and AtTask.

Why is BPM my target for improvement?

I have been recently criticized for quoting Peter Drucker as an argument for ACM versus BPM. It is obvious that BPMS do not support knowledge work and don’t empower the user. I also quote W. Edwards Deming who proposed that it is essential to make the business system transparent to understand how it performs against the value goals. BPMS do not do that either, but only focus on reducing cost by standardizing procedure. Efficiency is however not about economies of scale. Toyota’s Taiichi Ohno proposed that efficiency will be achieved by ensuring uninterrupted flow (the Just-In-Time concept). Meaning that the system has to be ready when the flow comes in and therefore you actually need the idle resources that BPM or LEAN want to cut as waste. The fallacy of BPM is that standardization of work will reduce the cost and while that may be true in manufacturing it is not so for service work. UK management thinker John Seddon says that when you reduce the ability of a system to handle variety then you reduce the value delivery and increase the failure demand and both drive up cost. Hence, when you focus on cost reduction you drive it up, but only when you focus on delivering value then the cost will be lowered! ACM is the embodiment of such value-focused BPM methodology through business-friendly and low-bureaucracy technology empowerment.

A Functional Spectrum for ACM (and BPM)

I propose that ACM represents a spectrum of functionality that can be seen from different perspectives. In the following I created a first try of a matrix that maps ACM levels and styles. Look at it as a structured listing and not a hierarchy of dependencies. I use a business perspective to describe functionality and not technical implementation language. The functions are not aligned or co-dependent in row or column. I have used the term ‘Evolutionary’ to describe a complex-adaptive-system style of process management. For BPMS today most of the functionality listed in Dynamic, Adaptive and Evolutionary styles has to be handled by slow and expensive governance or by integration work with other software systems such as for rules and content. Don’t take the assignment of functions to styles as too literal. I was not easy to assign them and it is a matter of how the function has been implemented. From the feature matrix one can construct any kind of BPM, ACM or Collaboration system. Pick and chose to define the system you need or want to buy: 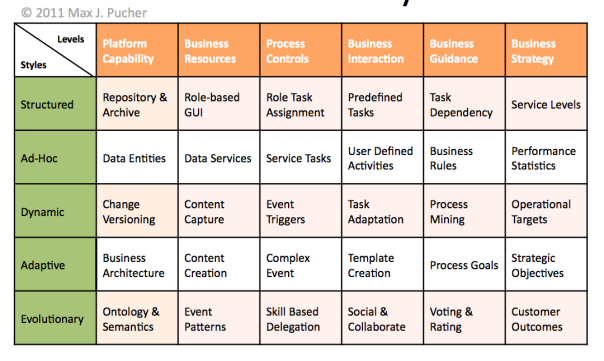 ACM Levels and Styles by Function

Keith Swenson proposes the creation of an ACM Manifesto, which is one possible way to deal with the lack of agreement. I would very much like to create such a manifesto if it fulfills the usual purpose: A declaration of principles used by revolutionaries. In the literal sense it is however no more than a passenger or goods manifest of a vessel. But as it seems my goals are too high for my co-revolutionaries. They want to find consensus on a list of functions that would unambiguously make a product ACM and to this end rather reduce the functionality spectrum to exclude BPMS features. Additional capabilities are then to be seen as nice-to-have because lacking them would not reduce the ‘adaptiveness’ of the solution. The DCM Wave of Forrester Research just lists BPM vendors with case management functionality.

Keith Swenson proposed that simple definitions of teams, folders, goals, records, security, and communication will provide the ability to replace email as collaboration platform: ‘I would like to see ACM be a clear definition of the ability for a case manager to take on and complete goals, collaboratively, with history, and reuse of previous case patterns. Deployed not as a solution development platform for the IT department, but instead as an infrastructure that replaces email. An ACMS has to handle content. An ACM has to keep history, but process mining is an extra nice to have feature.’

He proposes that ACMS and BPMS require different skill sets and different people, which is correct if BPM is seen as a flowcharting design paradigm. BPM is for me the same ACM work activities guided by very strict rules and dependencies, which could thus be shown as flowcharts. Knowledge work is in difference to BPM guided by customer outcomes, goals, constraints, events and most of all user skills. ACM is the higher level capability and offers expanded process controls, more empowerment for the user and an embedded improvement paradigm. Keith suggests to call the combined ACMS/BPMS functionality APS or Adaptive Process, which I proposed as an option two years ago. At the time I wanted to make clear that an Adaptive paradigm offers much more opportunity than just runtime modifications by users.

Karl Walter Keirstead in difference proposes that ACM should possess BPM capabilities. He lists as a minimum feature set a repository (archive), a GUI to allow users to create work tasks (structured and ad-hoc) with resource and people allocation, background constraints and compliance checking, management dashboards and back-end data connectivity.

Do we focus on sales or on business needs?

I agree with both Keith and Karl Walter that all of their ACM features are necessary, I just take a much longer and more customer outcome oriented perspective. I interpret Keith’s stance as a ‘let’s-not-rock-the-boat’ attitude that is understandable from a typical marketing perspective while it could limit innovation! It is as if Steve Jobs would have said: Let’s NOT design a product that interferes with current markets for mobile phones, MP3 players, navigation systems, and handheld computers. Let’s carve out a niche that doesn’t overlap so we don’t have to compete!’ I have also been criticized for quoting Steve but like me, he focused on making things that already existed really easy to use. He simply removed the apparent complexity for the everyday user, but not by dumbing down what the user can do. Exactly the opposite. He put not less but MORE functions into the same device! I too want to put more functions for all business hierarchies into ACM and not less!

So how can ACM be further defined?

While I am working on a larger paper on the subject and also on a book, I have decided to post some of my thoughts to further the discussion and to invite feedback. This is not the final version and while I would have wanted to wait, it makes sense to collaborate on this as Keith requests. I propose however that we need to define the fullest functionality and then each vendor can define, which subset of features he wants to cover. I suspect that most vendors might not like this approach if they can’t have all the checkmarks. I nevertheless defined another perspective that segments functions into Model, Discover and Adapt requirements. I group features into three ACMS types: basic, full and strategic. Remember, this is a thought exercise only. 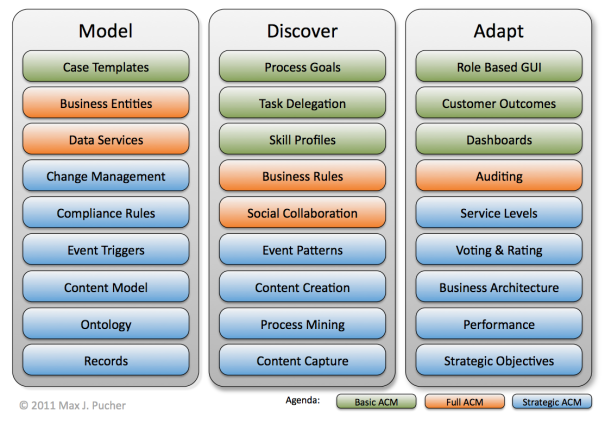 The Model segment is functionality that is required to create the essential models that allow the business to define how it wants to describe its work. A Basic ACM system will have most of those pre-coded. If not, the models are created by architects. The Discover segment deals with functionality that business uses to create the actual processes. The Adapt segment is used by management to guide the knowledge workers. Some functions are overlapping and I put them where I see the most benefit. This is a very subjective definition of what I know about the market. I would make Change Management mandatory but not all products possess this and it is an IT management function. Remember, this is a first idea how to structure this.

What would be the business benefit of a lesser definition? If a business wants just a Basic ACM functionality then they know where to turn even if they know that there is more. If a business decides for a Strategic ACM solution then that does not mean they have to reorganize or change the company culture as has been suggested. Not all departments have to use all functionality. I have said many times that I don’t see that the software should restrict or force the business in any way. Exactly the opposite! The ACM platform must allow each business and department to work as they see fit to achieve customer outcomes and avoid the failure demand and increased costs that process standardization would cause. 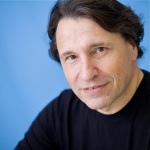